A game of marbles

Have you ever played a game of marbles?

Small things, I believe, create big things. It's all about opportunity.


For the past 8 weeks, I have basically written nothing. I'm in the middle of a novel, and I have written next to nothing. Oh, I've penned the odd thought or two, and I've typed in a few opening sentences...but nothing that really leads to anything. Flotsam and jetsam, as it were...(which isn't accurate at all, if you know me, but let's just go with that for now).


And then, today, after days of anxiety, because I'd come to realize I had moral issues with what I had initially planned with my story line, and had decided to abandon it...today, I finally gave serious thought to what I should do, not what some macabre part of my mentality had initially decided upon.


You don't come to these kinds of decisions easily. You come to them through a harrowing ordeal that demands you confront yourself and your innermost demons and angels, and you come out in the end with either something you can live with, or something you are shamed by, but will go ahead with anyway.


I prefer the former. Thank you very much.


So what I have done is not write a single constructive sentence, nothing that furthers my work in progress, until I know, for certain, that what I am writing is what furthers the story.


The story is everything.


And what came to me today, in review, is one sentence. "The words rolled off my tongue as smoothly as a marble across a tilted tabletop."


It was basically an innocuous statement. But today, when I reread it, I thought, No, wait...this sentence is far more than what it comes across as.


And it hit me...and I hit google. What I googled was "marbles."


You'd be surprised what information there is about marbles. I wasn't. (Very little surprises me.)


And this is what I came up with:

"The words rolled off my tongue as smoothly as an agate marble across a table top."
* * *
Writing is not an exact science. This is what I have come to learn. I do not pretend to know what I do. I have never known how to verbalize what I do. I can only do what I seem to know. This sentence, after weeks of non-productivity, has provided for me an inlet that I can only liken to someone in a kayak looking for a seaswept current that brings them closer to something, some seaward view, they have dearly wanted to see.

I thought of marbles, and was bequeathed a world. All I had to do was ask. If you don't ask, you will never know the answer.

I've always been one to ask. 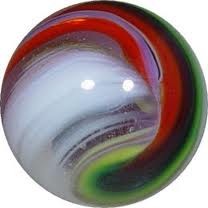